Tech stocks have come under intense pressure lately. It’s been a perfect storm of trade-war and regulatory concerns. A poster child for the tech sector’s troubles has been Facebook (NASDAQ: FB).

Facebook is free to use for its users. But nothing is truly “free.” Every time someone uses Facebook, the company is collecting data on the user. An app that is linked to Facebook can also collect data on users and their friends.

Besides being a public-relations (PR) nightmare for Facebook, the scandal has also caught the attention of regulators. The Federal Trade Commission will investigate the company for possible privacy violations. Additionally, Facebook founder Mark Zuckerberg will testify in Congress about how the company handles the massive amounts of user data it collects.

Shares of the stock have come under tremendous pressure lately, falling about 15% over the past two weeks as investors digested the impact of the scandal, which could meaningfully impact Facebook in two main ways. 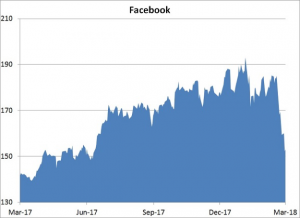 Advertisers Care About One Thing

First, the bad PR could cost Facebook customers and reduce user engagement. A few advertisers have ended their relationship with Facebook and others may threaten to leave. However, if Facebook plays its cards right, we suspect advertisers will stay.

When YouTube (owned by Google) got in trouble last year for hosting extremist content, more than 250 brands suspended their YouTube ad campaigns, but after Google did some PR damage control, it gave the brands political cover to return again. In other words, advertisers want to criticize Facebook to look good in the public eye, but as long as Facebook shows that it’s trying to do better and ads continue to bring in money for its customers, advertisers probably won’t leave out of moral outrage.

More concerning is whether the bad PR reduces Facebook’s user base and user engagement. Advertisers are willing to pay Facebook to display their ads because the social network attracts billions of views per day.

When people think of social media, we bet the name that first comes to mind for most people is Facebook. In 2016, the Pew Research Center found that 79% of Americans who go online are signed up with Facebook. The next closest was Instagram (32%), which Facebook also owns. That is utter dominance. Indeed, the company is an entrenched incumbent, a key trait that we look for in growth companies. Even with the scandal, it’s difficult to imagine anyone else unseating Facebook as the most-popular social network.

But if the fear of the loss of privacy significantly shrinks Facebook’s user base, and brands find that their ads on Facebook are losing effectiveness, then Facebook would lose leverage with its customers. So, while the social network should still remain number one, if advertising revenue fall, its stock will suffer. Only time will tell whether enough people will abandon Facebook to make a dent.

Will There Be New Rules?

The second legitimate worry is crippling regulation. Facebook ads work because Facebook is able to selectively display specific ads to target audiences that are most likely to be receptive, based on the data collected about them. In other words, a brand’s ad is being shown to people most likely to spend money on that brand’s products.

If regulators mandate changes to protect user privacy in ways that prevents targeted marketing and make the ads ineffective, then advertisers will either leave or demand discounts. Here, too, only time will tell.

As Facebook tries to dig itself out of this mess and its share price fluctuates, watch for clues about Facebook’s user statistics and possible regulatory action.