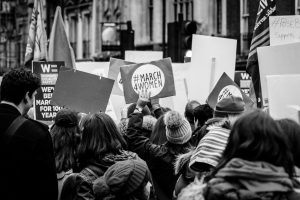 As I look at my business career, I had to develop the ability to see changes taking place before they materialized. This is something that you learn and experience in a world where the only thing you can be sure of is change which always starts to happen before anyone recognizes it.

In my career over 30 years in the financial industry, I experienced many noteworthy trends that were not popular to be featured by mainstream media especially as it pertained to women.

Women were at a major disadvantage by the sheer numbers of men to women. This was in addition to gender bias in the work place. Looking at the numbers, in the company I worked at, men probably outnumbered women 30 to one. This was very much evident in most industry corporate environments. Men formed political clicks, where they plotted and strategized to move ahead in their careers with the help of their new cadre of allies. Women formed social clicks not political ones. This created a disproportional disadvantage on top of a bias by management which was made up mostly of men.

The irony was that my best employees by far were women. Both managers and non-managers were by far more effective as leaders and workers. They put in longer hours and got more done in the hours they worked. They were better communicators and much more creative. They were willing to think outside the box and take creative chances. They, contrary to management’s worry about them having to take taking maternity leave were out sick much less than men. Often working through being ill and not complaining.

Their strength actually became their weakness because the better they performed the more they were exploited. The current environment of constant media announcements of sexual abuse and harassment has crystalized and focused the world on women’s plight and suffering.

This is the harbinger of the change that I foresee and a chance for Women Empowering Women to be at the fore front of this tipping point and C-change.

By building an enlightened community of women worldwide and supplying them with both the knowledge and tools to change their lives and other women’s lives will help not only level the playing field but elevate them to compete and achieve on the basis of ability and motivation.

Women account for 55% of the wealth in the United States today according to a Forbes survey. This is expected to grow to 80% by the year 2025.

Women have to learn how to handle their wealth and know where it resides. They need to take control and influence the wealth that is theirs. Right now, most women do not even realize they are the owner of such wealth. This is because it is hidden and bestowed upon them for all the wrong reasons. Mainly to hide the assets and protect it from outside invasion because of legal reasons or tax reasons.

There is no reason why women can’t become very effective investors. They have more patience to spend the time doing the proper research and do not act emotionally.

Armed with the proper education on investing, they will become the masters of their own destiny. Women Empowering Women is dedicated to teaching the art of investing.